What critics say about Dialogues 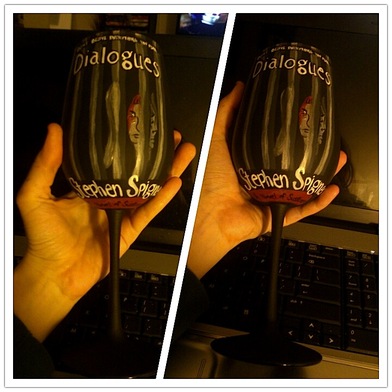 THE KIRKUS REVIEW
The first published review of Dialogues

An ingenious debut, largely talk, follows a moral and spiritual light as it rises out of darkness in a mental hospital. The main dialogue takes place between Tory and psychiatrist Dr. Baraku Bexley, who looks into her past with her ... Sucks you in, then delivers a wildly weird and unforeseeable ending.

Reviewed by the Waterbury Republican-American

MURDER IN THE MIND

Stephen Spignesi is a New Haven writer whose genius for plotting and his style make this a chilling, disturbing, suspense novel.

Tory Troy is a bright, engaging young woman who is locked up in a mental hospital and facing six counts of murder. Before she was confined, she was a certified animal euthanasia technician in a New Haven animal shelter. But when six people who worked at the shelter were found dead in the gas chamber there, she was accused of their murder.

Spignesi tells the story through conversations Tory has with her court-appointed psychiatrist, Baraku Bexley, and others he interviews - including her mother, the nursing staff, a former English teacher of hers and her lawyers.

It is as if we are eavesdropping on their sessions. The story takes us into Troy's mind and the depths of her confused soul.

Stephen Spignesi takes us on a wild, non-stop psychological trip following Tory in her job. The twists and turns, not knowing what could possibly occur next, kept me deeply engrossed and not able to put this book down. When it ended, I wanted more of Mr. Spignesi's writing. He knows how to keep a reader!

DIALOGUES is incredible. Spignesi hits it out of the park. It's terrific. I could not put it down for the last forty pages … Spignesi truly pulls the rabbit out of the hat with a surprising, yet satisfying and plausible conclusion. A superb, delightful read with great characters and dialogue … This deserves to be a bestseller!

By the uncanny climax, Stephen Spignesi will have readers exchanging dialogues on this insightful uniquely rendered thriller.

Tory Troy emerges as a smart, intuitive, sometimes funny woman who loves animals (and has a credible rationale for her job, which is described in detail) and who seems to harbor no particular ax to grind against her fellow employees. So what pushed her over the edge? Wisely, Spignesi allows readers to think about that on their own.

After years of working in the field of encyclopedic nonfiction books about everything under the sun from Mayberry to the Titanic -- including a fistful of books about Stephen King -- Stephen Spignesi turns his talents to fiction with intriguing results.

Dialogues is the story of Tory Troy, a woman accused of a terrible multiple murder at a Connecticut animal shelter. As the novel opens, she is being evaluated by a psychiatrist in order to determine whether or not she is competent to stand trial for the crimes.

What is most unique about this novel is the method in which it is told. The entire story is told through the dialogues between various characters, with the only narrative prose coming from a handful of short stories written by Troy, which are examined by various professionals in the hope of finding a clue to the ghastly crime. And, truth be known, the answer is to be found there.

Spignesi manages to keep the story moving throughout, although the lack of narrative and description takes some getting used to. Also, people who work in the professions portrayed in the novel may be alarmed by some of the liberties taken with the protocols and procedures actually used in those fields. But rest assured, there is a reason, and all becomes clear once the end is reached.

All in all, DIALOGUES marks an auspicious fiction debut for an already-established writer who has made a tremendous start at broadening his horizons.